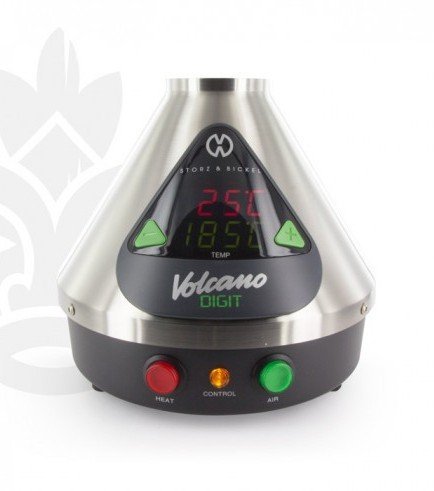 Storz & Bickel gained an excellent reputation as the maker of outstanding, precision-engineered desktop vaporizers. The Volcano Digit is the successor of their famed Classic Volcano vaporizer, featuring the same first-class quality, performance and durability but with more added features. A top vaporizer "Made in Germany"!

By buying this product you can collect up to 41 loyalty points. Checkout your current loyalty points score and all available gifts via the Loyalty Bonus Page.
Tweet
Starting from € 419.00
Description
Blog
Description

Volcano Digit is legit. Storz & Bickel developed this spectacular vape for vapor-heads that require precision. The reason temp control is highly desirable for cannabis consumers is because cannabis comprises approximately 400 compounds, which are released from the plant at different temperatures. By regulating the temps with precision, the consumer is allowed to decide which compounds ought to be released. Pretty cool, right!? Volcano Digit is solid, reliable and an excellent piece of vaping technology.

VOLCANO DIGIT - HOW IT WORKS

The design of this vaporizer is very similar to its Volcano Classic counterpart. The most standout difference is the digital display, which shows the current temperature, and the destination temperature. Volcano Digit is a convection vaporizer, which entails that the air is heated and passed through the heat chamber, which vaporizes the herb. One can set the temperature between 40 to 230°C, which provides the consumer with plenty of room to play. Of course, Volcano Digit is a bag vaporizer. A bag is filled with vapor, which is in turn inhaled and enjoyed. One can choose between purchasing this vape with an easy or solid valve. The valves differ slightly, although they both function perfectly.

First, you plug the unit into the wall socket. Regulate the desired temperature by pressing the (-) and (+) buttons, it’s pretty straight forward. After, the red button is switched on. Wait until the top number matches the number below, which is the desired temperature. Once the temperature is met, place the filling chamber with the ground herb on the heating plate. The bag is attached and the green button is switched on to release vapor into the bag. When the bag is nicely filled, it's detached from the heating chamber, and a mouthpiece is attached, to allow vapor consumption. The heating chamber must be removed from the heating plate, before hitting that toke!

Other products from Storz & Bickel (Volcano/Mighty) 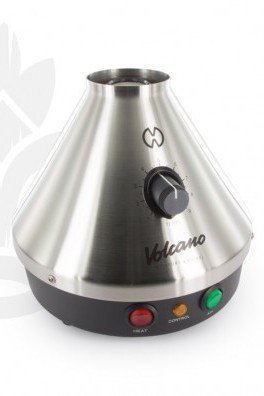