Royal Queen Seeds is one of the fastest growing seed companies in Europe. Their experienced team built up many years of experience in the Netherlands, producing cannabis seeds of the highest quality. Zativo’s customers value the extensive product range Royal Queen Seeds offers, and also consider the excellent price-performance ratio of RQS when shopping for seeds. Award-winning classics like White Widow, Northern Light, and OG Kush are just a few examples. All seeds by RQS are organically produced, hand-picked, and regularly tested to ensure the highest germination rates possible. Don’t be concerned if you got lost in their wide range of seeds to choose from. Take a look at our list of the Top 5 best selling feminized strains by Royal Queen Seeds, and get a first impression what other growers like. 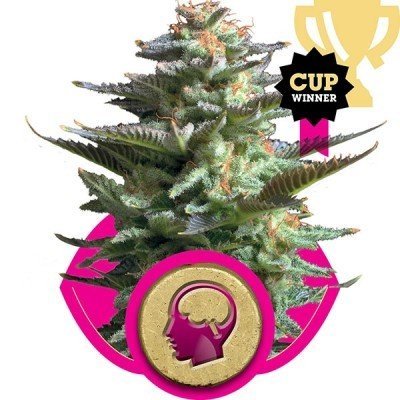 Amnesia Haze is not surprisingly ranked first place among our feminized best sellers by RQS. The potency is at unbelievably high levels with 22% THC, and the strong cerebral high is loved by many cannabis connoisseurs around in the world. Amnesia Haze has always been a big seller in Dutch coffeeshops, and is also a very popular variety among European growers. The small downside is the longer flowering time of Haze strains like Amnesia, but a long flowering time doesn’t come without rewards. Amnesia Haze is one of Royal Queen Seeds high-yielders, and will produce indoor yields of up to 600-650g/m² in a flowering period of 10-11 weeks. Outdoor cultivation is possible in warmer climates, preferably in a greenhouse, and results in large harvests of up to 700g per plant. Most of our customers prefer to grow Amnesia indoors though, due to the late time of harvest at the end of October. Besides high yields, Amnesia stands for the finest cerebral and uplifting effects one can possibly imagine. The name Amnesia doesn’t come out of the blue. After taking a few hits, your brain is basically on flight mode, which might results in forgetting a few unnecessary things that float around in your head. 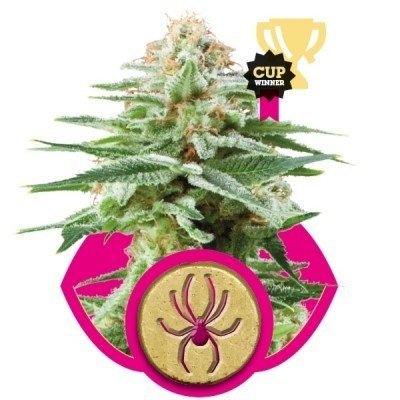 White Widow has a complex and long history starting in the early 90’s in Amsterdam. Since this strain won several categories at the High Times Cannabis Cup in 1995, it started to spread all over the world, and White Widow was soon to become one of the most popular cannabis strains of all time. We can only hope that White Widow is not insulted by only being ranked 2nd place in our Top 5, and not 1st, but our sales numbers don’t lie. Royal Queen Seeds did an excellent job in reviving this Dutch old school legend, and offer a version of White Widow with typical indoor heights of 60-100cm, and a production potential that peaks at 450-500g/m². White Widow can also be grown outdoors or in a greenhouse, and will get along with moderate climates present in many parts of Europe. Outdoor harvests can be realized by the second half of October, giving outdoor growers in warmer climates an advantage. The secret behind White Widow’s success lies within the well balanced genetic makeup between Indica and Sativa, resulting not only in a powerful high that is strong, uplifting and cerebral, but also in great hybrid vigour, and reliable growth. White Widow by Royal Queen Seeds means playing it safe, excellent results are almost guaranteed. 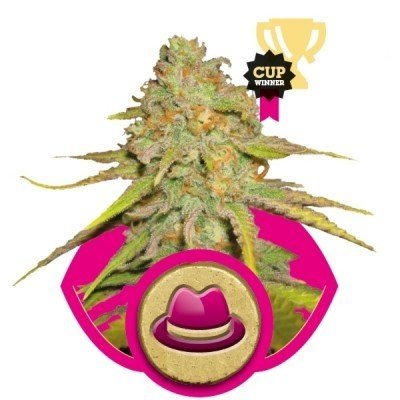 The legendary OG Kush, also known as Ocean Grown Kush, came in last place of our Top 5 feminized best sellers by RQS but shows tremendous potential to rank higher in the future. OG Kush is suspected to be a crossing of ChemDawg, Lemon Thai, and Pakistani Kush. It’s very likely that OG Kush was first grown in California, also indicated by the “Ocean Grown” abbreviation within the name, though there are rumors saying it was originally a ChemDawg clone from the East Coast, coming to northern California through the Lake Tahoe area. Despite a mystifying genetic history, OG Kush convinces with hard facts. This strain will produce indoor yields of up to 550g/m2 in a flowering period of 7-9 weeks, and lab results continuously show THC levels of 19%. OG Kush by Royal Queen Seeds has way more to offer than just basic growing traits most cannabis strains of today also display. The success of this strain is primarily caused by the strong effects that can be felt in a physical way, resulting in an unbreakable cock-lock, but also mentally, being stimulating and a little euphoric, so rather Sativa-like. The aromatic profile is equally unique. It’s a blend of slightly acidic citrus and lemon flavours, with a fuel taste coming from ChemDawg, arranged with an earthy pine flavour of Kush. 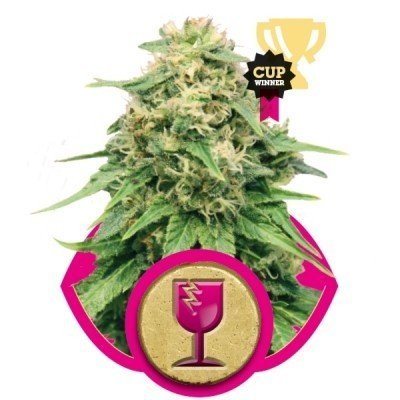 Critical combines yields, flavour, and a short flowering period like no other cannabis strain in the Royal Queen Seeds lineup. Critical is one of the best choices when growers aim for the highest yields cannabis plants can possibly produce in a flowering period of 7-8 weeks. It’s been a very popular variety since the moment it was released, and it certainly is until today. It’s one of our big sellers by Royal Queen Seeds here at Zativo, and of course, a heavy yielder. Critical produces up to 650g/m² in a flowering time of only 7-8 weeks! When Critical is grown indoors, plants will stay compact and won’t exceed height of 80-140cm. Most phenotypes finish with heights below 100cm. The short internodal distances of Critical will eventually fill out with buds, helping a lot to achieve these record-breaking yields in such a short time. This strain is valued for its great efficiency, and a good choice when aiming for a high gram-per-watt ratio. It wouldn’t make sense to produce large amounts of buds when the effect is in some way inferior to similar indica-dominant hybrids. This is clearly not the case with Critical. THC levels were tested at 18%, and ensure a powerful and relaxing Indica stone. 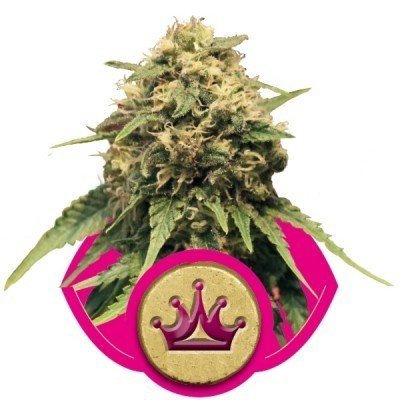 Special Queen 1 by Royal Queen Seeds is a feminized cannabis strain that was created to fit the needs of novice growers, and of interested cannabis users who think about taking first steps to grow their own. Special Queen can be seen as Royal Queen Seeds entrance card to the world of cannabis cultivation, and was created by fusing some of the most reliable cannabis strains into one Skunk variety that packs a punch, but more importantly, is very easy to grow. Special Queen is for those who seek simplicity and reliable growth, and not a big experiment that might work or not. This strain is forgiving when growing conditions are not ideal, but when they are, indoor yields of up to 550g/m² will be the reward for a caring grower. Another factor responsible for the high popularity of Special Queen is the short flowering time of only 7-8 weeks, and the great versatility concerning different set-ups and growing techniques. This strain will perform outdoors, indoors, in a greenhouse, using soil, hydro, or coco. Special Queen does it all - One of the many reasons why it appeals to a large base of Zativo’s customers. More experienced growers see in Special Queen a reliable and cost-effective producer of high quality Skunk buds with 18% THC. Special Queen ranked 4th in our Top 5 feminized best sellers by Royal Queen Seeds, but is first choice when it comes to ease of growth.