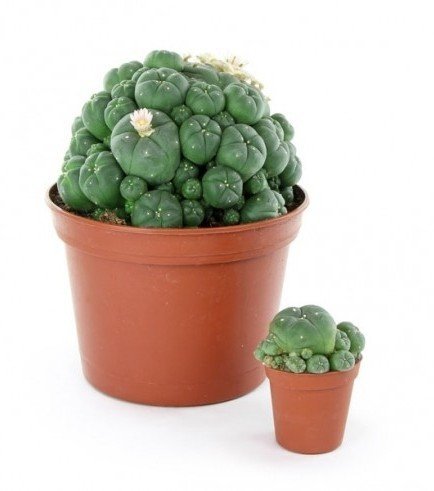 The Peyote with Pups, a special version of our regular Peyote (Lophophora williamsii), packs a psychoactive punch. Users experience states of intense introspection accompanied by visual and auditory shifts. Native to Mexico and southwest Texas, the long-lasting trip that is associated with Peyote, has made this special cactus a go-to favorite for spiritual individuals worldwide.

By buying this product you can collect up to 12 loyalty points. Checkout your current loyalty points score and all available gifts via the Loyalty Bonus Page.
Tweet
Starting from € 27.50
Description
Blog
Description

Peyote with Pups: a Peyote variety for those seeking something special

Peyote has a long history, dating all the way back to 3700 BCE. Historically used for spiritual practices of the South American culture, the Spaniards were determined to wipe out the practice in the 16th-18th centuries due to them associating the practice with witchcraft. The Spanish were unsuccessful, and more native communities were noted for using Peyote throughout the Americas. During the 20th century, the Native American Church was formed, and Peyote became a protected drug for their spiritual guidance.

It can take a couple of years for the cactus to properly produce its psychoactive properties. But this version of the Peyote has pups that develop disc-shaped "buttons". When harvesting, cut the buttons off of the plant horizontally at ground level. Do not damage the roots. This is a slow growing plant; if the subterranean level becomes injured, the cactus will experience a slow death and will not produce any more pups.

When replanting a harvest, let the base dry and callous for a week or two. Place plant in porous soil or a vermiculite/perlite mixture. It should then be watered regularly, but allow for dry periods between soakings. New roots and a strong taproot should develop within a year.

Taking Peyote can have adverse reaction with your stomach; the plant can have a strong, unwelcoming taste. One probable outcome of ingesting the drug will be vomiting. This is not uncommon, and it is suggested to not eat anything 6 hours before using.

It is not recommended to ingest Peyote if there is a history of mental health problems. Do not use with alcohol or if the person has heart problems. Peyote can cause variations in heart rate, blood pressure and breathing. Do not use if pregnant or breast feeding.